The Violent Take It By Force? 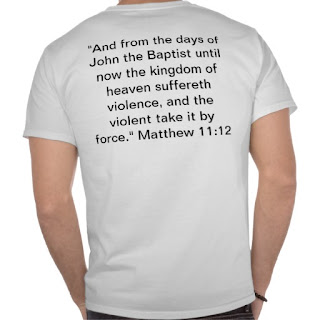 Here is a saying so strange that it is avoided and therefore widely unknown. What did Jesus mean when he said of the kingdom of heaven, ". . . the violent take it by force"?

Matthew   "From the days of John the Baptist until now the kingdom of heaven has suffered violence, and the violent take it by force."

This is a rarely heralded quote from Jesus. I have only heard it preached once---by a female Pentecostal preacher on one of the top Christian cable networks. Her interpretation could have been taken from a self esteem seminar. She said that you can’t just sit around waiting for the kingdom to come to you. (That contradicts the Scriptural stance that the kingdom is a gift, doesn’t it? And it contradicts the Lord’s Prayer doesn’t it? Thy kingdom come?) She said you have to get up and take the kingdom by force! Thousands in her audience were jumping up and down and cheering. They liked her saying that Christians should be the “violent ones” who take the kingdom by "violence." Please don’t ask me why they liked it. I have no idea.

But to be fair, the female televangelist is not the only person to wrestle with this perplexing saying. It seems to contradict so much of what Jesus says elsewhere about the presence of the kingdom and its coming. What do violence and the violent have to do with kingdom living?

I won’t go into detail describing the many optional interpretations of this verse. But here are three just to give you a taste:


These and variations on them never satisfied me. Then I came upon a scholarly paper written by a Jewish Christian living in Tel Aviv, named Avram Yehoshua (Abraham Joshua or Abraham Jesus!). His paper isn’t of any great length, but it is meticulous and compelling. It’s specifically about Matthew 11:12, and it contains no less than 55 footnotes. The 55th one caught my attention.

Yehoshua credited his interpretation of Matthew 11:12 as coming from his reading of David Biven’s “Understanding the Difficult Words of Jesus” (Austin, TX: Center for Judaic-Christian Studies, 1984). Bivin is a scholar who has written voluminously about the Synoptic Gospels (Matthew, Mark, and Luke). He did his post graduate work at studying Bible under the likes of David Flusser, and archaeology under the likes of Yigael Yadin. These aren’t lightweights.

I heard of Flusser and his protégé, Brad Young, when I was in teaching. My friend, Brian Kvasnika, himself a student at at the time, was high on all of these guys, and I began to ask questions and read their books. One of the things that Flusser and Young pioneered was the translation of the Greek New Testament “back” into Hebrew, hypothesizing that our four New Testament gospels may have originally been written in Hebrew and only later translated into the lingua franca (commercial language) of the , Koine Greek. They marveled at what they found. Difficult passages in Greek seemed to make better sense in Hebrew!

In the case of Matthew , something unexpected happens when you translate the Greek to Hebrew. That’s exactly what Avram Yehoshua did, following the lead of David Bivin.

Yehoshua quoted the verse from the Nestle-Aland Interlinear:

“And from the days of John the Baptist until now, the Kingdom of the Heavens is forcibly entered (by-aides-zeh-tie), and violent men (by-ace-tie) seize it (hah-pahdz-zu-sin).” (I put the three key terms in bold.)

When Yehoshua translated those three key words into Hebrew, he saw exactly what Jesus was saying:

The first key word: “The Hebrew word for 'is forcibly entered' (the Greek by-aides-zeh-tie) is poretzet and comes from the Hebrew verb paratz. The primary meaning of the verb paratz is, 'to break or tear down...e.g. a wall...to break asunder, to break forth, as a child from the womb, Gen. 38:29; of water, to burst forth...a torrent bursts forth...also to break out, act with violence, Hos. 4:2'.”

The second key word: “The Hebrew noun used for 'violent men' is port-zeem and is just the plural of the one who tears down (the first key word, poretzet). These too would be breakers or breachers (of the wall or fence).”

With those three key Greek words translated into Hebrew, Yehoshua translated the whole of Matthew from Greek into Hebrew and then into English. This is just amazing. Here it is:

“And from the days of Yohanan (John) the Immerser (Baptizer) until now, the Kingdom of the Heavens is being breached and the breachers are possessing it.”

What Yehoshua immediately saw was that “Jesus was alluding to the prophetic passage in Micah about the Messiah being the Shepherd that would breach or tear open a section of the fence or wall of the Sheepfold . . . for the Remnant of Israel. The Sheep (believers; breachers), would then continue to break down and break through the fence of the sheep-pen into greener pastures (the ), as they followed their Shepherd.”

ESV Micah 2:12-13   I will surely assemble all of you, O Jacob; I will gather the remnant of ; I will set them together like sheep in a fold, like a flock in its pasture, a noisy multitude of men.  13 He who opens the breach goes up before them; they break through and pass the gate, going out by it. Their king passes on before them, the LORD at their head.

Yehoshua provides his own more literal translation of Micah 2:13: 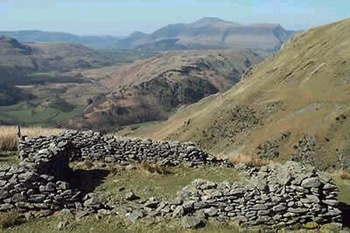 Now, back to Matthew 11:12: Yehoshua’s translation of the passage back into Hebrew then into English makes sense of this verse to me for the first time:

John announces the presence of the kingdom of heaven. Jesus announces it, and he as much as claims in his own humble way to be its presence. He embodied a new very present reality. Jesus was cryptically and humbly announcing that he is the shepherd in Micah 2:12-13, the wall breacher, the one who breaks down the barrier of sin and death between his Father (Yahweh) and his sheep (the human race). His death and resurrection and ascension accomplish this. And those who follow him (know and trust him and his Father—John 17:3) will bust out into the green pastures of the kingdom of heaven.

Is that cool, or what?

For more of Jesus' parables see The Absurd Parable of the Unforgiving Slave, The God Who Gambles, Parable of the Vine and Branches, The Crooked Manager, The Friend at Midnight, Heaven Is Like a Crazy Farmer, He Speaks Of . . ., Salted With Fire, Talking Sheep and Goats, Is Your Eye Evil?, Two Prodigals and Their Strange Father, The Lazarus Parable Is Not About the Afterlife,and Jesus Used Parables Like a Sieve.
Posted by Unknown at 1:00 PM No comments: Links to this post