The Christian Ambush: A True Story 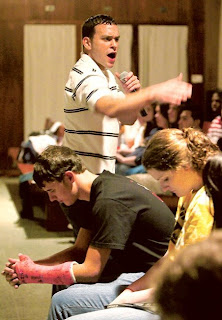 I was once suckered into a captive audience situation. In high school I was a music lover. That’s an understatement. I suppose that’s what made me vulnerable. A girl I liked invited me to a “concert” at her church. “What kind of concert?” I asked. “I don’t know really,” she lied, “just a live band. They’re supposed to be really good.” But the lie was justifiable, her youth pastor had explained on Sunday (a friend later informed me), because the teenagers in the high schools don’t realize the precariousness of their eternal fate. When an immortal soul is at stake, sometimes you have to do or say what’s necessary to get them to church, he said.

How dumb am I? Of course it was a rat trap, and I was the rat. Things went badly for me fast. Just in case you’re wondering why I didn’t just walk out; I hadn’t driven myself, being only 15 years old. They’d picked me up, and it was a longish drive in the rain at night. I wasn't going to call my mommy to rescue me. There you have it. They were my ride, and unless I wanted to be soaked to the bone and freezing, I was stuck.

Well, first of all the band stank. And the songs stank. I was just sitting there minding my own business when the critical moment came. I didn’t see the ambush coming. The lead singer asked everyone who was “saved” to stand up. Suddenly I had a choice to make. I felt the pressure build around me. It was in the air. I had to choose. I could stand up and avoid the humiliation that was about to be unleashed upon the poor seated “unsaved” kids, or I could risk staying seated and hope for the best. Well, the best was not to happen for me that night. I should have run to the bathroom and hid in a stall until it was over, but that option didn’t occur to my 15-year-old stupid self because my folks “raised me up” not to be rude. (Never mind the rudeness that was about to be inflicted on me!)

From my seat I looked around, and as far as I could see, I was the only one seated. I felt like a toadstool in a giant redwood forest. I sat there wondering how any of these teenagers could possibly think they knew what “saved” meant. I wondered how many of them stood up to avoid being singled out. I remember actually praying to God to help me be brave in the face of the pressure that was about to be applied to my boneheaded remaining-seated concert-going self.

“We’re going to pray now for those who are seated that they might know the Lord and accept Jesus into their hearts to make him the Lord of their lives and be born again,” the lead singer said (or something to that effect). He prayed for a long while. Yes, he started with threats of hell. There were lots of Amens and teary halleluiahs from my “friends” in the immediate vicinity. But wait, there’s more.

They asked my friends for my name. The singer began praying into the microphone for “Bert’s” eternal soul. Entrapment and now I was betrayed by my buddies. (But it was entrapment and betrayal for a “noble cause,” they certainly rationalized.) At least I found out at that moment that there were others seated like me. My name was not the only name called. I had partners in crime somewhere else in the forest of standing, praying, weeping “Christians.” I felt a little better knowing I wasn’t alone.

After a very long prayer supported with tears and whispers of “Yes Lord,” the singer instructed everyone to lay hands on those seated as he prayed. The first hand put on my head made me really angry. They had shanghaied me and now they were violating my personal space. I didn’t give anyone permission to touch me. But they got away with it because, I presumed, there were only two ways I could have stopped them from touching me at that point. I could physically protest in some way, push their hands away, but I worried that would draw even more unwanted attention. Or I could stand up and “get saved!” But I didn’t do either. I folded. At least a dozen hands touched my shoulders and head, and I just sat there humiliated. Surely I was the victim of the longest mercy molesting in the history of Christendom.

My “friends” didn’t talk to me on the way home. They were punishing me for something, I guess. I wondered if the silent treatment was a planned response designed to shame recalcitrant heathens who refuse to knuckle under to pressure. I couldn’t believe the hostile atmosphere in that car. No one said a word the entire way home. But I was glad in a way. I had nothing to say to them—nothing nice anyway. They dropped me off in cold silence. Maybe they took it personally, like I had held out on them so as to embarrass them in front of their church friends and youth pastor. Perhaps I robbed them of bragging rights: “We saved Bert Gary! Can you believe it? Bert Gary! It’s a miracle!” I really don’t know. But one thing was certain. They judged me as hopelessly hell-bound and never spoke to me again.


See this blog published as an article in PTM with a fantastic layout
Posted by bertgary at 4:10 PM No comments: Links to this post