Every head bowed and every eye closed

A priest, a minister, and a guru sat discussing the best position for prayer, while a telephone repairman worked nearby.

“Kneeling is definitely the best way to pray,” said the priest.

“No,” said the minister. “I get the best results standing with my hands outstretched to heaven.”

“You’re both wrong,” said the guru. “The most effective prayer position is lying down on the floor.”

The repairman, unable to contain himself any longer, said, “Hey, fellas. The best praying I ever did was when I was hanging upside down from a telephone pole.” 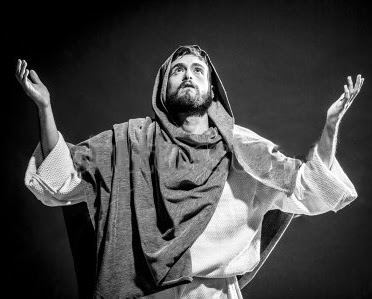 When Jesus prays prior to a miracle, something he rarely does, he looks up to heaven (once in Matthew, twice in Mark, once in Luke, and once in John). For example,

Mark 6:41 Taking the five loaves and the two fish, he looked up to heaven (ouranos = heaven or sky), and blessed and broke the loaves, and gave them to his disciples to set before the people; and he divided the two fish among them all.

John 17:1 After Jesus had spoken these words, he looked up to heaven and said, "Father, the hour has come; glorify your Son so that the Son may glorify you . . .”

Why did Jesus look up to pray sometimes? Is the heavenly Father really “up there” somewhere—implying that he is somehow absent “down here”? Did Jesus believe like other ancient peoples that God’s heaven is beyond the sky’s dome of blue waters? Or was Jesus’ sense of God’s Spirit that, like the wind, it comes from everywhere in the air around and above us? The Bible neither emphasizes nor clarifies why Jesus on occasion looked upward when he prayed.

What’s strange to me is that while Jesus prayed with his eyes opened looking up, we Christians pray with our eyes closed and our heads bowed down! The next time someone says, “Let us pray,” sneak a peak. Watch the heads bow and the eyes close automatically. Some pastors go so far as to specifically instruct worshipers with the words, “Every head bowed and every eye closed.” Why is that?

Heads bowed and eyes closed may be the customary posture for prayer among Christians today, but it’s certainly not biblical. Jesus never gave instructions to bow your head and close your eyes when you pray. Neither did anyone else in the Bible. So why do we do it?

I have a theory. 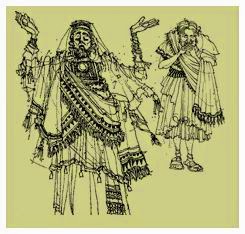 In Jesus’ parable of the Praying Pharisee and Tax Collector, the Pharisee stands where he can be seen as he thanks God that he’s better than other people because he fasts a lot and gives a lot of money. But . . .

Maybe this is why we Christians face downward and close our eyes when we pray, so as to imitate this tax collector’s humility. We avoid looking up to heaven by bowing our heads.

NET 1 Corinthians 14:25 The secrets of his heart are disclosed, and in this way he will fall down with his face to the ground and worship God, declaring, "God is really among you."

So there is evidence in the Bible, though weak, that sometimes people bowed their heads when they prayed. But are there biblical references to closing one’s eyes to pray? No. While there is some precedence for falling on your face for worship, perhaps meaning to include prayer, I can find no biblical instructions specifically to bow your head and to close your eyes when you pray.

Frankly, I don’t think Jesus intended to regulate praying postures with his parable of the Praying Pharisee and Tax Collector. It was the man’s heart—not his posture—that was “justified.” Should you press your palms together or fold them? Should you stand or kneel? Should you raise your hands or hold hands with others? Do you want to know what I think? I think you could pray standing on your head wearing a pink tutu if you wanted to, but it wouldn’t help. Prayer’s effectiveness has little to do with body position, though the creator of this imaginative chart obviously disagrees. 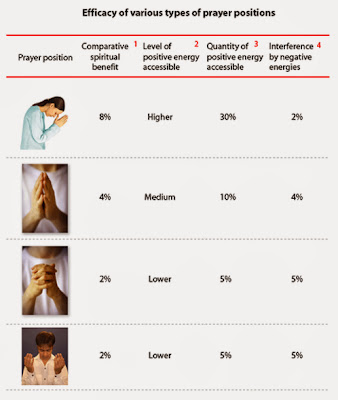 Nevertheless, on several occasions our New Testament says that Jesus looked up to ouranos (sky or heaven) when he prayed. Is that why his prayers always “worked”? Is there magic in looking heavenward? Was he showing us how to properly posture ourselves for prayer? If so, why do so few Christians today do it that way?

I often open my eyes when I pray. I like looking outward or upward because it reminds me that I have come to believe that the kingdom of heaven is near us, around us, among us, and within us, as Jesus insisted. I don’t have to close my eyes to imagine the kingdom. I can see it all around me with the eyes of faith.

On the other hand, many whom I’ve spoken with about this topic have told me that closing their eyes to pray helps them to block out distractions.

So, do we avoid looking toward heaven as the tax collector did in Jesus’ parable? Or should we pray with eyes heavenward as Jesus did on occasion?

Again, I don’t think it matters. I’ve never had the sense that the position of my eyelids makes God any more attentive. If it did, I’d pray upwards every time, rub my rabbit’s foot, avoid stepping on any cracks, and contort myself into the Lotus position—whatever worked.

Standing? Kneeling? Prostrate on the floor? Eyes closed? Eyes opened? Head raised? Head bowed? It doesn’t really matter, it seems to me. I doubt that posturing manipulates God. And I doubt that anyone but a religionist would monitor your prayer posture.

Posted by bertgary at 3:53 AM 6 comments: Links to this post