Church pews had an innocent enough beginning in 1622, in Plymouth, Massachusetts. The Mayflower companions built a small wooden sanctuary for the purpose of Sunday worship. But chairs were few in the Pilgrim outpost. Luxuries like chairs were too difficult and time-consuming to make, and there was an unforgiving ocean between them and the nearest furniture store.

The minutes from the November 21 church council meeting that year record a unanimous decision to commission the only Frenchman in the settlement, Pepé Le Pew (unmarried), to make benches for seating in the church. Tall, straight pine trees were felled, and rough planks were hewn. The crude pine picnic-style benches were placed in straight rows in the rustic sanctuary, and they were put to use for the first time on November 27, 1622.

No, the benches weren’t comfortable, but the discomfort only lasted an hour or so, and the stoic society considered this discomfort to be congruent with their rather austere theology. They felt it their duty, even in small things, to deny the flesh, to share in the suffering of Christ, and to live a lifestyle as plain and simple and straight as the pine planks themselves. Life in Plymouth was cold and hard, and so were the benches.

All furniture in this early Pilgrim sanctuary had liturgical names. The pulpit. The altar. The baptistery. Calling these crude seats “benches” seemed too secular to the Plymouth faithful, so it was decided at a church council meeting, November 28, to call the benches “pews,” after Pepé Le Pew, the unmarried Frenchman who fashioned them.

The only controversy surrounding the church pews is recorded some ten years later. The community had grown significantly due to continuing European immigration. An unmarried Frenchwoman named Penelope Félin had immigrated alone to Plymouth that year. She brought a formal complaint and a motion to the church council in 1632, as recorded in the minutes. She accused congregant Pepé Le Pew of unwanted advances, and she demanded that the church leadership address this outrage by removing Le Pew from the church.

When her motion failed, she made another. She noted that times had changed, and pointed out both the availability and affordability of chairs in America, and she moved that the church pews be replaced with more comfortable seating. The church council saw this as no more than sour grapes on the part of Penelope, for everyone knew that it was Le Pew who made the pews. This motion was also denied. The pews stayed. Penelope in haste packed and left Plymouth under cover of darkness. The next day, Le Pew declared his undying amour for Penelope, then packed and set out in pursuit of her.

In the years following, as more and more European Christians immigrated to America, nearby settlements built churches and made pews. They were blindly following the practice at Plymouth, ignoring the affordability and availability of chairs. In the late 17th century, every sanctuary in ..New England.. had Le Pew’s pews.

For one hundred years the pew remained in use and unchanged in America. And it is unknown when the first back rests were added to the pews for the comfort of the congregants. But it was a popular emendation, essentially turning a picnic table bench into a park bench. 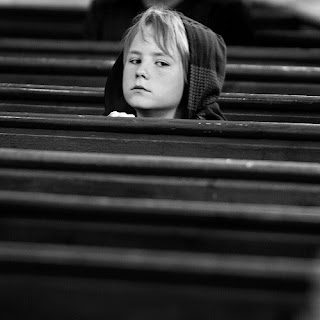 Then during the 20th century, pews were accessorized. It started with the availability of hymnals. Stacking them at the end of the pews made it necessary to pass them down and pass them back. A spice rack maker in Boston attached his creations to the backs of his church’s pews and called them hymnal racks. He made a fortune. Slots for offering envelopes were added too. But a new invention, the pencil, was needed to fill out the envelopes, so new slots were designed with little wells in which to place the pencils. (The greatest accessory of all, the pew cushion, came later. Pews are pretty uncomfortable, with or without cushions. But cushions must have helped somewhat, because by 1980 most of the pews of America were cushionized.)

The wood from which the pews were fashioned was upscaled in most 20th century sanctuaries, too. Mahogany and maple were in use, making the pews both heavier and more expensive. While the cost of chairs had continued to drop, the cost of twenty-foot, quarter-ton, mahogany pews skyrocketed.

It is not clear why pews in America were, in the span of a mere decade, bolted to the floors of sanctuaries. Some reports say that fear of theft was the reason for anchoring the expensive pews. Some reports note that someone always had to straighten them after worship; people bumped and scooted them, and the pews had to be perpetually repositioned in equidistant, straight rows. One report, strangely enough, said that there was a concern that pews weren’t particularly stable when at full seating capacity, and that some legal types in a congregation in Washington D.C. were worried about law suits should one of those pews tip over backwards spilling the elderly ladies’ Sunday School class on the backs of their heads. Whatever the reason, America’s expensive, heavy, accessorized pews were screwed to the floors of nearly every church in America by 1950. The price of chairs, really comfortable ones, was at an all-time low.

Were there complaints about these fancy pew accessories in 1950? Yes. There are always those who resist change. Were there those in 1950 who, on the other hand, questioned the money spent on expensive, heavy, accessorized pews fastened to the floor, when chairs were cheaper and more comfortable, and chairs can be rearranged or removed so that the space can be employed for a wider variety of uses? Not many. For 350 years, pews had held worshipers in America. Pews had become the familiar though uncomfortable furniture of God. Prayers made from chairs? It seemed suspicious, almost unsightly.

Then a simple study was done by an obscure doctoral student in a Dallas seminary between 1999 and 2004. He tracked the population of nearly 300 churches in the Dallas metro area. Out of curiosity, he included in his data whether the worshiping communities used pews or chairs. The result was shocking. Churches with pews were losing members. Churches with chairs were growing. The statistics were dramatic. Pew churches had an 11% decrease in membership in only five years. Chair churches had an astonishing 54% increase in membership in only five years.

When the study was picked up by the Dallas media, Gallup took note. They designed a five-year study of 10,000 congregations nationwide. Among the data collected between 2004 and 2009, there was a question about seating: pews or chairs? Again the results were stunning. Pew churches nationwide declined in membership 24.5% while chair churches increased in membership by a staggering 177.5%.


Then came the now famous cover story in the nation’s largest selling Christian magazine. It explored Gallup’s findings on the pew versus the chair. As you might expect, the churches with chairs were predominantly newer congregations. The majority of them didn’t own buildings and had no need for a board of trustees. And their worship services were informal and contemporary. The averages ages? The average age of the pew churches was 65. The average age of the chair churches was 35.

Nothing in the article was so surprising, really. Church in America was changing fast. And, as the article said, there was no magic in using chairs. “Chairs don’t change churches. But it does appear that changing churches choose chairs.” No controversy or argument there. Statistics don’t lie.

The buzz wasn’t about the article, however. The buzz was about the cover photo. On the cover of the number one Christian magazine in the country was a family of three seated on the front pew of a stained-glass sanctuary. From left to right is a father, a son in his late teens, and a mother. The father, in his gray suit and black tie, is nodding off with his mouth open. The mother, in a gray dress and white pearls, is chewing on the inside of her lips, picking at her fingernails, and cutting her eyes at her son. Seated between them, the son is looking very 2009, with spiky hair and piercings and long baggy shorts. The expression on his face is a mix of frustration and yearning. But none of these things caused the buzz. The buzz was all about the teen’s T-shirt.

The son’s T-shirt is white. There is a cartoon character on the front, and beneath this cartoon character are two words. This cartoon character and those two words in bold black letters are considered by some to be the 21st century equivalent of the 95 theses said to have been nailed by Martin Luther to the door of the Wittenburg Chapel, October 31, 1517. The T-shirt may not have sparked a modern-day reformation, but it galvanized it.

Now that it’s the year 2059, the church looks back fifty years on that iconic magazine cover from 2009 as the beginning of the end of traditional Christian worship in America. Yes, traditional worship continues today, but the faithful in the pews are few, now only about 2% of Christian worshippers. You can add a back rest to a pew. You can accessorize a pew. You can cushion a pew. But the pew will always be the pew: a heavy, immovable, uncomfortable bench that would not go away even when better and cheaper seating was available.

The Plymouth church should have listened to Penelope Félin in 1632 when she made the motion at the church council meeting to replace the uncomfortable pews with chairs. Whatever happened to her? No one knows. And Pepé Le Pew, what of him? He also disappeared from history. Their names, however, resurfaced around 1950, at about the same time that pews were being bolted to church sanctuary floors. Two cartoon characters, a skunk named Pepé Le Pew and a cat named Penelope Pussycat (Félin in French), became favorites of children and adults.

I don’t need to tell you who the cartoon character was on the front of that teenage boy’s T-shirt. Everyone knows today. But for the sake of thoroughness and posterity, I record it here. Seated on a pew between a dozing father and a nervous mother, a frustrated and yearning teen wears a white T-shirt. On the front of the T-shirt is a cartoon skunk named Pepé Le Pew, and he is lounging atop two words that changed Christian worship for the better. And those two words were . . . 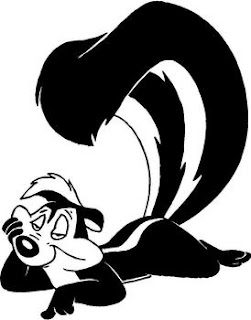 PEWS STINK!
To be sung to the tune of "Love Stinks" by the J. Geils Band

You might consider this blog on pews a parable. Here are other analogies, some of which are parables: What Color Is a Green Apple?, The Kingdom of Heaven is Like Gravity, A Guitar Hero Parable, and A Country Fried Parable.