Improvisational Grace – or the Gospel According to Wynton Marsalis 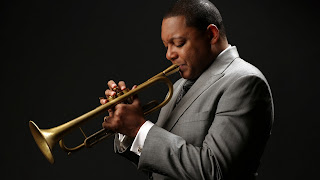 “For I am convinced that neither squawk nor squeak, neither blare nor bleep, neither growl nor screech, nor any droning organ prelude, neither Christian metal nor Pentecostal polka, nor any caterwauling in all creation, will be able to separate us from the melody of grace that is in Christ Jesus our Lord.” ---Bert

The Atlantic Monthly printed a story entitled Wynton’s Blues by David Hajdu. The author was present for a jazz performance by world-renowned virtuoso trumpeter Wynton Marsalis at the Village Vanguard in New York City’s Greenwich Village. Here is Hajdu’s eyewitness description of what happened.

[Marsalis] played a ballad, "I Don't Stand a Ghost of a Chance With You," unaccompanied. Written by Victor Young, a film-score composer, for a 1930s romance, the piece can bring out the sadness in any scene, and Marsalis appeared deeply attuned to its melancholy. He performed the song in murmurs and sighs, at points nearly talking the words in notes. It was a wrenching act of creative expression. When he reached the climax, Marsalis played the final phrase, the title statement, in declarative tones, allowing each successive note to linger in the air a bit longer. "I don't stand ... a ghost ... of ... a ... chance ..." The room was silent until, at the most dramatic point, someone's cell phone went off, blaring a rapid singsong melody in electronic bleeps. People started giggling and picking up their drinks. The moment—the whole performance—unraveled. Marsalis paused for a beat, motionless, and his eyebrows arched. I scrawled on a sheet of notepaper, MAGIC, RUINED. The cell-phone offender scooted into the hall as the chatter in the room grew louder. Still frozen at the microphone, Marsalis replayed the silly cell-phone melody note for note. Then he repeated it, and began improvising variations on the tune. The audience slowly came back to him. In a few minutes he resolved the improvisation—which had changed keys once or twice and throttled down to a ballad tempo—and ended up exactly where he had left off: "with ... you ..." The ovation was tremendous.
Atlantic Monthly article: http://www.theatlantic.com/past/docs/issues/2003/03/hajdu.htm)

When you think about it, how could it have been any other way? How could God have fixed our tune without playing our tune? How could God restore the magic of heaven’s melody without acknowledging our ugly little bleeps, without gracefully playing back to us our ugly little bleeps, and then masterfully improvising on our ugly little bleeps until it transforms back into melodious magic. What is the incarnation, the coming of God in the flesh, if not grace improvising on the sour notes and discordant interruptions of human caterwauling? Our weak flesh ruining the magic is embraced by God, and by becoming sinful flesh Jesus condescends to play our tune and bring the discord back into tune. God in the flesh plays our song, braving the dissonance, cradling our jangled intonations. The disharmony of sin’s interruption is resolved by the creator, but not without his joining in our song. There is indeed magic in the moments of improvisational grace, when intonation is restored and the tone deaf are made pitch perfect.

The crucifixion, the mother of all magic-killing moments, became the high and holy moment of improvisational grace. Jesus took the ugliest tune of all and sang it with all his heart, so that the depraved theme of human violence and hate, sin and death, might not be the last note. The cacophony of the crucifixion was sung by the creator, such that the most strident noise imaginable was transformed into the song of angels: “Worthy is the Lamb, who was slain, to receive power and wealth and wisdom and strength and honor and glory and praise!” (Revelation 5:12)

Because magic ruined became magic restored by God’s improvisational grace, we have real reason to hope and rejoice. When we cannot get a wrecked refrain our of our heads and out of our lives, we have a God who not only knows that refrain, but he sings it with us, and then coaxes us in new directions until the wrecked refrain is transformed and our heartstrings are singing in his key. He does not condemn our tone-deaf chorus. He joins the choir. And look who is in the choir loft with us. Simon Peter, a brassy fishermen whose song always seemed to fall flat, was handpicked by the Lord to tune the orchestra. The Apostle Paul, a Wagnerian horseman breathing fire, and an insufferable music snob to boot, was appointed as choir director. Jesus was not looking for people with perfect pitch. What he was looking for were people who would let him sing along and improvise with grace when they sing a real stinker. For there is not just magic in the melody of the Lord, but there is also magic in his improvisation on our ugly little bleeps.

My heavens, listen to the squawking coming from our churches! And look at us. We sit around pretending that the sound is not like fingernails on a chalkboard. We are in denial. Have we for so long been preoccupied with patting our feet to the ugly little bleeps that we have forgotten the music of the master? And yet . . . the master even squawks along with the church to change her tune. For I am convinced that neither squawk nor squeak, neither blare nor bleep, neither growl nor screech, nor any droning organ prelude, neither Christian metal nor Pentecostal polka, nor any caterwauling in all creation, will be able to separate us from the melody of grace that is in Christ Jesus our Lord.

There is an unresolved element to the Wynton Marsalis story, isn’t there. That is often the case in really good stories, like the Parable of the Prodigal Sons. Did the older brother join the grace party for his little brother? We do not know. I do not know what happened to the cell phone offender, and I am worried about him/her. Let’s call the offender a “she,” for the moment. I imagine her killing the call, running from the room in horror, crying in the lobby, but then she hears what is happening back inside the hall. Wynton is playing her ringtone on his trumpet. Wynton is saving the day. Redeemed by the master, she reenters the venue with a smile, Wynton sees her and points to her and blows her a sweet kiss, the spotlight swings around and finds her, all heads turn, and the offender takes a bow to the renewed applause of a grace-filled congregation. Oh how I do not want her to have missed the spectacular beauty that her error occasioned! I hope to God that she did not miss grace completely redeeming her.

We know by now that we are going to mess up the moment sometimes. And by now most of us know our own graceless patterns, with ourselves and with others. What we have not learned so well is to hear God whistling our messy tunes, right there in our worst moments, showing us that we are not alone, that the Holy Spirit willingly enters our messes with a longing purpose: to show us how good things can come from bad mistakes, that we can learn something, that we can grow, that we can let Christ transform our graceless condemning choruses into something spectacular. If we can do that, we know the next step. Having received grace, and having been transformed by grace, we can improvise on the offensive tunes of those whom we feel have ruined our songs. Who knows? Our enemies might sing along.

Marsalis playing I Don’t Stand a Ghost of a Chance with You: https://www.youtube.com/watch?v=y3ZUOxyxLZQ

Posted by bertgary at 1:09 AM No comments: Links to this post