Every Halloween there is out there in Churchianity a little something I like to call the ultimate in evangelical perversity: Hell Houses. A Hell House (also called Judgment House or Doom House) is a take-off on the old haunted house or house of horrors, but Hell House is sponsored by a church and often held at the sponsoring church facility. The idea is to scare the hell out of you, literally. They show you how to get to hell and what it will be like in order to pressure you into "getting saved" so you can be counted on the pastor's tally sheet.

In each successive room of Hell House, visitors are “treated” to a series of brief skits. Typical dramas are a bloody high school shooting at point blank range, a bloody suicide, a bloody abortion performed on a screaming teenager, a bloody satanic ritual killing, and other scenes that might involve bloody drunk drivers, dopers, adulterers, or witchcraft aficionados. (Hell House instruction manuals—yes, there are instruction manuals!—specifically advise you to whip up a large fresh batch of fake blood every day.) As if that isn’t objectionable enough, bloody September 11, 2001 ground zero scenes have become popular too. 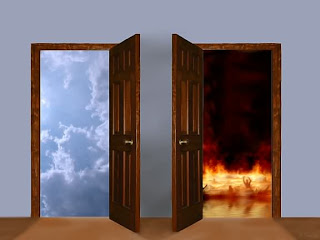 At the end of your Hell House experience, there are typically two exits. Visitors are asked to accept salvation by repenting of their sins and accepting Jesus. If they want to do that, they should go through the “good” exit (that they say leads to Jesus and heaven).  If not, they have to exit through the “bad” door (Satan and hell). No one asks anything of you if you leave through the bad door; you just get ignored. But if you exit through the good door, they have you sign stuff having to do with a tally of “souls won” for upcoming religious activities.

I received a letter once from the pastor of a church that sponsored a Hell House. It listed members of the church I served who “received salvation” by departing the good door at their recent annual House of Holy Horrors. The names on the list were mostly teenagers in our youth group, and they reported to me that the pressure put on them was overwhelming.

Do you think that any Hell House visitors have ever been impacted with the love of God? Or did the visitors claim to have “made a decision for Christ” because it was the least anxiety-producing way to escape the intense psychological pressure being applied?

This I know: People attending Hell Houses never hear the gospel, the real gospel of the Bible. Moreover, I never read in Scripture that Jesus ever used fear, gore, intimidation, and psychological pressure to introduce people to his heavenly Father. I will never condone this sick spiritual terrorism. (When a friend of mine read aloud this last sentence in a Bible study class I led, instead of “sick spiritual terrorism” he read “slick spiritual terrorism!” What a terrific Freudian slip!)

What do you think Jesus’ opinion is about the terrorizing procedures of Hell Houses?

There is no fear in love, but perfect love casts out fear; for fear has to do with punishment, and whoever fears has not reached perfection in love. (1 John 4:18)

Even though it’s clearly not scriptural, churches continue to use fear to motivate and control Christians. So, how do churches sustain these misguided evangelical scare tactics?

Hell Houses are just an extreme of modern evangelicalism's standard operating procedure. You could be enjoying a cool October evening at the State Fair when a young man, a complete stranger to you, approaches acting friendly. Smiling. Interrupting. “You enjoying the fair, sir?” he asks you, but not really interested in your reply. “Man, that pretzel looks good,” he continues without waiting for you to respond. Then he springs his little rat trap. “Sir, are you saved? Do you know Jesus Christ as your personal Lord and Savior? If you died today, are you certain that you will go to heaven?” He pushes a tract into your hands. He doesn’t ask your name. He expresses no interest in where you live, how many kids you’ve got, what you do for a living, or where you may or may not attend church. He doesn’t even apologize for the interruption. He’s at the fair on a single-minded yet misguided mission:

Stop strangers from going to hell.

More than mere rudeness, his actions are coldly impersonal. He’s not there to meet you or get to know you or to have a relationship of any kind with you, much less to walk with you through your struggles in life. He’s engaging you in a non-relational exchange—really more of a bombardment. The true, biblical Gospel is at its core relational. Yet this young man’s approach is decisional. 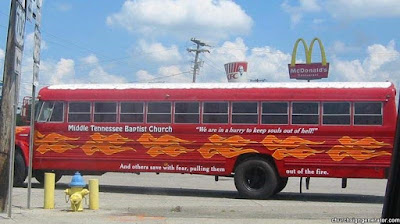 Earlier, on a garishly painted church bus, he was given instructions by his pastor on what to say and do, so the young man is not entirely to blame. He wasn’t instructed to relate to you. The pastor likened all the “unsaved” (There’s a completely unbiblical word!) at the fair to people in a burning building. He stressed urgency. The idea is to get “bodies” out of the burning building, i.e. to “save them,” meaning save them from hell, or more specifically, save them from God sending them to hell when they die or on judgment day, whenever it is that God supposedly does the judging, condemning, and sending to hell stuff. Amen.

I don’t know how far back the burning building analogy goes, but thanks to the internet I found it in an excerpt from a book by Mississippi evangelist T.T. Martin from 1923:

“Isn't saving a soul from spending eternity in hell ten million times more important than saving a human body from a burning building?” 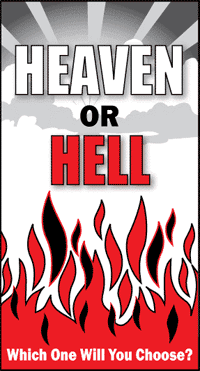 So there’s our young missionary’s rationale. He has been influenced by his pastor to believe that the end justifies the means. It’s OK to be rude and non-relational to people at the fair because it’s in an effort to save them from God’s sending them to eternal torture. Apparently even dishonest conversational ploys are justifiable given their perceived urgency of the situation. Our young man is doing his job and following his pastor’s instructions, and he likely believes he’s doing what Jesus wants him to do too. So when the pastor asks him at the end of the evening how many he “witnessed” to, he can give him as large a “body count” as possible. He’s punched his ticket with x number of rude interruptions at the fair, x number of "decisions for Christ," x number of bodies saved from burning. His pastor punched his ticket with the recruitment of x number of teens making x number of rude hell-fire-tract-interruptions at the fair resulting in x "decisions."

I can hardly believe that the burning-building crowd can maintain this utter contradiction. Their face on the world is that they have salvation, and you don’t. They have to make you into their image by acting assured of salvation. Yet at the very same time, the key to the message within the walls of many a church is planting seeds of doubt about everyone’s salvation! Only fear will continue to feed the guilt-driven, decisional mechanics of confrontational evangelization. Do you see it? Fear attracts bodies. The church feeds them fear. Fear attracts bodies. The church feeds them fear. Round and round goes the hamster wheel of religion.

Why are the church’s tactics not blackmail and black magic? Isn’t using intimidation and threat to extort money and membership blackmail by definition? Isn’t pressuring people into reciting a formula that’s supposed to presto-chango switch their afterlife destination sorcery by definition? Intimidation and incantation. Threats and spells. Aren’t these blackmail and black magic just in the dictionary sense? Isn’t it obvious? What else could threat and magic words be? But, ironically, the religious folks call it “good news” and “prayer!”

There’s a huge problem here. I am willing to bet that for most people “getting saved from hell when you die” has actually become “the gospel” as they know it. I’m dead serious. Stand at the door of any church following worship. Survey people as they are leaving. When asked what the good news is, won’t most people say this or, with variation, its equivalent: “You can get saved by Jesus so God won’t have to send you to hell when you die!”

There is no treating and a lot of tricking going on at your local Hell House this Halloween.

What if, in the Bible, being “saved” has little to do with reserving a spot in the afterlife and more to do with being set free to live now and forever? What if, rather than fear and threat, the message of Scripture—the good news—is that you can trust and rest and live in the grace of God in Jesus Christ given freely to the world?

For more evangelical bad behavior:
The Prosperity Gospel: God In a Box
Katrina: The Wrath of God?
The Christian Ambush: A True Story
Don't You Hate Christian Tracts?

For a definition of biblical salvation see my blogs:

Are We Supposed To Be Afraid of God?
Hell Defined 1 (Sheol and Hades)
Hell Defined 2 (Gehenna and Tartarus)
Lake of Fire Defined


Read more: http://www.myspace.com/bertgary/blog#ixzz11JXa3xQZ
Posted by bertgary at 12:28 PM 4 comments: Links to this post