A Guitar Hero Parable (or the Gospel According to Slash) 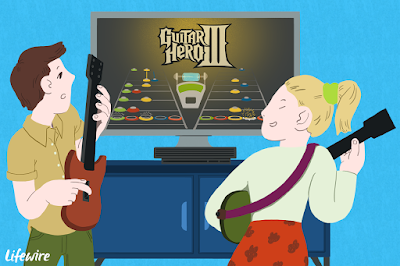 [Definition: Guitar Hero is a video game where you simulate playing lead guitar to popular rock songs. You use a guitar-shaped controller to press fret buttons that match scrolling dots on your TV screen. The more accurate you are at matching the scrolling dots by pressing the correct fret buttons at the correct time, the higher your score. The person with the highest score wins.]

He’d already beaten everybody in his family, church, and school, so he figured he had a chance to win and to meet his real life hero, Slash. He practiced like crazy. He got faster and more accurate. Finally, the day of the southeast regional contest came.

He didn’t want to appear cocky as he took the stage, but swagger and rock ‘n roll go hand in hand, so he couldn’t help it. He turned toward the giant screen, with his back to the audience, the opening Slash riffs from “Welcome to the Jungle” assaulting his senses, and our young man didn’t miss a single scroll-down dot or colored fret button on his little toy guitar.

He won. He was one of six finalists from across the country. The final in Los Angeles was to be broadcast live on MTV. The young man was pumped. They flew him to LA.

The night of the final arrived and he was scheduled to play last. He watched the other performers, and they were good. But not good enough, he thought. It wasn’t arrogance really. He just knew that if he did what he was capable of, he would likely win.

He was introduced to cheers from the audience. He strapped on the miniature fake guitar and when the song began, he matched the recording of Slash’s roaring solo note for note, scrolling dot for scrolling dot, fret button for fret button. He’d never performed so well. 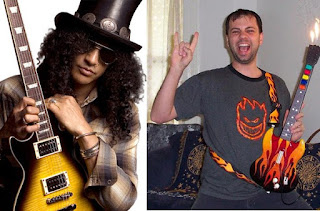 He won. The master of ceremonies announced that the young man was to receive a real guitar designed and signed and presented personally by Slash himself. The tall rocker in black leather, dark sunglasses, and an explosion of long frizzy black hair, sauntered onto the stage to the screams of the audience. He had the young man’s new guitar in his hand.

Introductions were made. The young man shook Slash’s hand and said humbly to all, “Slash, you are my true guitar hero.” The audience approved.

“Kid, if I were really your hero, you’d have spent those thousands of hours playing a real guitar, getting in a real band, and playing real music to real audiences. If I had inspired you to do that, you’d have been my guitar hero.”

Slash handed the young man one of the best and most expensive electric guitars ever made, one that Slash had designed himself, one that he had agreed to award to a video game contest winner. 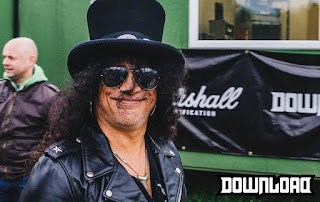 The legend turned and walked off stage smiling, shaking his head, and muttering to himself. “Wonder how much the little faker will get for it on eBay?”

For those who have ears, let them hear.

For Jesus' parables see The Absurd Parable of the Unforgiving Slave, The God Who Gambles, Parable of the Vine and Branches, The Crooked Manager, The Friend at Midnight, Heaven Is Like a Crazy Farmer, He Speaks Of . . ., Salted With Fire, Talking Sheep and Goats, Is Your Eye Evil?, Two Prodigals and Their Strange Father, The Lazarus Parable Is Not About the Afterlife,and Jesus Used Parables Like a Sieve.
Posted by bertgary at 8:50 AM No comments: Links to this post