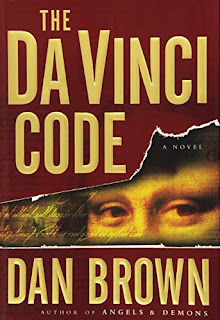 I am not worried that Dan Brown's The Da Vince Code harms anyone's faith. If a so-so novel brimming with falsehoods can destroy one's faith, then one's faith was not very strong to begin with.

I am, however, concerned about one thing, and it stems from Brown's statement of "fact" at the beginning of The Da Vinci Code. His novel begins with a page entitled FACT, and this quote:

"All descriptions of artwork, architecture, documents, and secret rituals in this novel are accurate." Dan Brown

Brown's quote on his FACT page is displayed prominently at the beginning of the book. Historians and biblical scholars alike have debunked this claim over and over since the book's publication, they have done so in dozens of articles and books (I recommend Ben Witherington's book, The Gospel Code.), yet the public seems to have, by and large, bought this fabrication to this day.

Whenever this comes up in conversation, someone often says to me, "Yeah, Bert, but it's just a novel." And that is unquestionably true. But how many bestselling novels have you read that begin with a page entitled FACT, and how many of them have a FACT page with false claims about the Bible?

There are three inaccuracies in this single sentence about ancient documents we call gospels:

"More than eighty gospels were considered for the New Testament and yet only a relatively few were chosen for inclusion - Matthew, Mark, Luke and John among them." Dan Brown, The Da Vinci Code, p. 231

Brown says this statement is factual, since the gospels are among the documents that he claims on his FACT page to describe accurately in his novel. But he is wrong:

By these three inaccuracies alone, it must be concluded that Brown's universal claim of FACT concerning his descriptions of documents in The Da Vinci Code is patently false, but there is more.

Is Brown intentionally lying about the Bible? I don't know. Either he is a shoddy researcher or he's misleading the public on purpose for profit. If the former, why not just apologize for his misstatements? If the latter, shame on him and buyer beware.

Posted by bertgary at 3:56 PM No comments: Links to this post