I start to punch 9-1-1 but then in the urgency of the moment I realize I’ve forgotten the name of the park. I unzip my backpack and pull out the brochure I got from the Ranger at the gate.

Gaviota State Park, California. It’s a sunny seventy-eight degrees. I’m sitting on a cliff ledge almost a hundred feet above the Pacific. The waves are only two feet high, but inland winds, accelerated to thirty miles per hour by the narrow park canyon walls, sweep across the waves, whipping up white tops and mist. To my left, a rusting train trestle, still in use, spans the small beach. Emerging from the right end of the beach is an even older looking wooden pier reaching out into the waves about five hundred feet. The happy fishermen on the pier seem unaware of what is happening less than a half mile from them.

I use my binoculars again to make sure she is still there. It takes a few seconds to find her because she has now drifted farther out, but she’s there. Treading water. No life vest. I know she is a young woman because I saw her paddling a small white boat earlier. She passed the pier heading up the coast. But then I saw her go in. She just lost her balance and rolled out. I watched her try to climb back in. I rooted for her, and believed at first that she was in no imminent danger, but she must have gotten tired. She lost her grip on the boat, and the wind took it away from her. That’s when I got concerned, because she swam so weakly trying to catch it, which was a futile effort in that wind. A wave helped the wind flip it, and it was capsized and on its way to Indonesia.

She watched the boat for a few helpless seconds. Then she turned toward the shore, toward me. I was too far away to see her expression, even in the binoculars, but something about the way she didn’t even try to swim ashore---the way she bobbed in the water looking at a distant beach she could never reach---made my heart sink.

I punch 9-1-1and put the cell phone to my ear. The operator's voice breaks up, but I’m pretty sure she’s asking me what the emergency is. 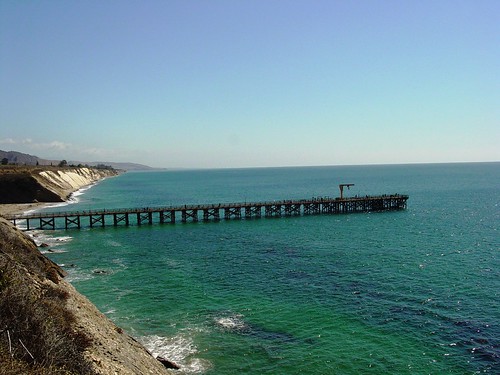 “There’s a girl in the water at Gaviota State Park. She’s about a half mile out and drifting out to sea. I don’t think she has a life vest on.”

She says I’m breaking up. I stand and repeat. I notice a heavy man on the pier sprinting toward the beach. Good, I think. Someone else has spotted her.

The operator connects me to the Coast Guard. I repeat everything. She wants details. While I’m talking a man on an orange surfboard is paddling toward the capsized boat.

“OK, there’s a guy heading out on a surfboard now.”

“Is it a lifeguard?” she asks.

“I hope so. But he’s going the wrong way. He’s going for the boat. He can’t see her. She’s drifted out and up the beach.” She asks me for my name and cell number and we hang up.

Another guy hits the water on a shorter blue surfboard. Both boarders are headed for the boat, not the girl. I whistle as loud as I can and point up the beach, but they can’t hear me. I whistle and yell and point but it’s no use. All I can do is watch now. I sit down and raise the binoculars.

She’s bobbing and drifting away. The boarders are paddling for the boat. But the orange boarder stops and raises himself up to look for her. Good! He paddles and rises up and paddles and rises up. He spots her and puts the nose down and paddles hard in her direction. I cheer and give thanks thinking that maybe this thing is over. Maybe my emergency call was for nothing.

He reaches her. They’re pretty far out now, and it’s hard to see exactly what is happening, but it looks like she’s having a hard time getting on the board. She makes it on about the time the blue board reaches them. Then both boards turn and start paddling for the pier. I decide to time them.

After ten minutes, the orange board, now with two passengers, is making zero progress, and the guy on the blue board is losing ground. They’re separated. But a third boarder, this one also orange, is going out to assist. In maybe ten minutes he’s speaking with the other orange boarder, but then paddles out toward the blue boarder. He ties a chord to the blue board and starts to try to tow him in. Five minutes later they’ve made no progress. The wind and currents are too strong. It’s easy to get out there, apparently, but not so easy to get back.

"They’re not going to make it without help,” I say aloud. I look left and right for the Coast Guard. Nothing. Ten more minutes pass and I hear a helicopter back inland. I stand up and turn as the chopper blasts past me and heads straight for the boarders. But it’s not the kind of helicopter that can land on water, so I’m wondering what he will do. I lift the binoculars and see a frogman standing on the runner, ready to go in. But he doesn’t jump. They just hover.

As if by magic, the presence of the helicopter makes the guys paddle harder. “Guys really hate being rescued,” I say with a smile. I watch them make slow progress as the helicopter hovers right behind them. Then I hear sirens. And more sirens. And more still. Then a jet ski cranks up all of a sudden and heads out from the beach. He hitches up the orange board with two passengers and begins towing them. When they approach the pier, I pack up, climb up the rocks, cross the tracks, and follow a trail down to the beach. Is she OK? 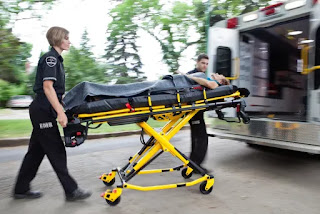 Two fire trucks are parked at the beach. Three utility trucks, one with a trailer for the jet ski. And an ambulance. As I reach the beach, I gasp when I see the young lady strapped to a stretcher. She’s so pale. Her trembling hands clutch the blanket to her cheeks. Then as they load her into the ambulance, she pulls the blanket over her face and presses it tight. I didn’t expect that. She’s hypothermic and exhausted. And fortunate.

I identify the first orange boarder. He’s the beach lifeguard. I hear someone call him George. We exchange stories, mine from a cliff top and his from the beach. The pier obscured his view, he said, and he didn’t know she was in the water until the heavy man ran down the pier yelling. The guy on the blue board was her boyfriend, and his inexperience with paddling on the shorter board got him in trouble. They had to send the jet ski back out to tow him in too.

Every fireman and frogman on the beach is smiling and slapping George on the back. The frogman in the helicopter gives George the thumbs up as they head back inland from wherever they came. George earned his paycheck today.

I stand there pondering the irony. I had been feeling down about not finding a job. I’d been out here in California since June, and despite hundreds of applications and calls, still nothing. A friend said I should go somewhere, maybe the beach, and pray and listen and take a moment for myself to just be. So, wanting to go to the Santa Barbara area, a beautiful area on the coast but not too far from Arcadia, I looked online and found Gaviota State Park. The cliffs, the rocks, the trails, the beach, the old trestle and pier looked just right. So I headed out.

I had checked out the beach, then a reedy area full of birds on the east end, then bought some water and decided the best place to be alone and pray might be up on the cliff. I walked the road and a trail, crossed the tracks, and found my way over the lip and sat on a ledge. Kelp danced in the waves. Pelicans dive-bombed silver fish from above while seals picked them off from below. I had been sitting there for thirty minutes when I began to pray.

I don’t usually close my eyes to pray. I just talk. I was sitting there talking when I saw her boat. To my naked eye, something appeared to be wrong. I raised the binoculars. You know the rest.

While I am still standing on the beach watching the firemen and frogmen and one frogwoman laughing and loading up, an older couple comes up to me.

“Are you all right?” she asks.

“I overheard you talking to the lifeguard. Were you alone up there?”

“Yes, ma’am.” And suddenly I’m wondering whether I am all right. I choke up a bit, feeling grateful to have had my binoculars and cell phone with me up there, grateful that George was on the job, and grateful for all the men and women on duty round the clock ready to risk their lives to save someone else.

I assure the woman I’m fine, and as she walks away I look around at the sunbathers and picnickers and wonder if there is a message in this for me. Is God talking to me? And if so, what is he saying?

Then it hits me. As I had watched her from the cliff, I had put myself in her place. She went out on an adventure alone and got in over her head. Perhaps she was me. I had gone on an adventure to California alone and was certainly feeling in over my head this weekend.

I walk back up the cliff to my Jeep and get in. At the park entrance I meet the truck with the jet ski on its trailer. They wave me to go first. I do. I’m pulling onto the coastal highway and I realize that what I just witnessed was exactly how I feel.

Does anyone on the pier see me bobbing in freezing water? Is there a guy on the cliff with binoculars and a cell phone watching over me? Will the lifeguard or the Coast Guard come for me?

At moments like this, what else can you do but wait and trust and hope?

I’m back in my one-room efficiency in Arcadia now, typing the events of today. I’ve told no one about this, and I thought about keeping it that way. But then again, I thought, this is a story that needs writing, and writing it has been good.

Posted by bertgary at 6:10 AM 3 comments: Links to this post