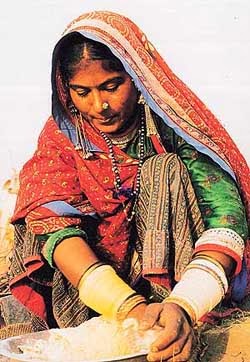 "The kingdom of heaven is like yeast that a woman took and mixed in with three measures of flour until all of it was leavened." (Matthew 13:33)

In Jesus' culture, baking was done by women and girls. So in this parable it is a woman who put a little yeast in with a lot of flour. Let me show you seven cool things about this parable.

First, Jesus used an example from the everyday lives of women. Women not only play important roles in his life and ministry, but a woman here gets to be the star of her own parable! Moreover, the woman is the “God character.” Jesus shows us heaven in a woman’s everyday chore.

Second, the NRSV translation I quoted above says she “mixed in” the yeast. But the Greek word here is evgkru,ptw ekgrupto {eng-kroop'-to}. It means literally “hid.” The yeast is hidden in the dough. And apparently there’s something about heaven that is hidden in the world. It’s not conspicuous. We’re not talking about something that is self-evident, just as Jesus himself was not self-evidently the Son of God. He didn’t glow or have a halo. Neither does the kingdom of heaven have a red neon light flashing above it to identify itself to all. Heaven is hidden in the world.

Third, yeast is not a dead ingredient like flour. Flour can’t rise all by itself. But yeast is not dead. It’s alive. And it brings the dough to life. Yeast is a germ that when placed in moist kneaded dough containing a little honey or sugar, grows like crazy causing the whole lump to expand. It’s a little pinch of Life, and a little pinch of Life is enough to leaven a whole lot of flour. Because of a small pinch of Life, the whole world comes alive. Jesus’ teaching in the world is like yeast, as is his own presence. He is Life, says the Scriptures. The Apostle Paul said that “He (Jesus) who descended is the same one who ascended far above all the heavens, so that he might fill all things.” (Ephesians 4:10) He fills us with himself, therefore we are filled with home, heaven, the kingdom, eternal Life.

Fourth, how much flour is Jesus talking about? He says three measures. A measure in Greek is sa,ton saton {pronounced sat'-on}, and it equals the Hebrew term "seah." A saton or seah is a little over 16 pounds of dry flour. So three of these is approaching 50 lbs of flour total, enough to feed over a hundred people! This huge amount of dough represents everything, the woman is God, and the yeast is Life (Jesus and his words and his resurrection) hidden by God in the cosmos.

Fifth, the yeast causing the dough to rise is a reference to resurrection. Jesus’ resurrection and Life leavened the whole world. The promise of Scripture is that because he rose, all will rise (like dough). This rising of the whole Loaf is the result of a single solitary Life. Because he “rises,” all “rise.”

Seventh, in contrast to Jesus and his heavenly yeast, Jesus warned about someone’s yeast: “Beware of the yeast of the Pharisees and Sadducees!"  Then they understood that he had not told them to beware of the yeast of bread, but of the teaching of the Pharisees and Sadducees. (underline mine) (Matthew 16:11-12) I suppose Jesus intended by this to convey that the yeast of the Pharisee and Sadducees either did not rise because their teachings were not Life-filled, or their yeast rather than causing Life to rise caused death by law to increase. Either way Jesus finds them guilty of keeping people out of the kingdom and not entering its Life themselves: “But woe to you, scribes and Pharisees, hypocrites! For you lock people out of the kingdom of heaven. For you do not go in yourselves, and when others are going in, you stop them. Woe to you, scribes and Pharisees, hypocrites! For you cross sea and land to make a single convert, and you make the new convert twice as much a child of hell (Gehenna) as yourselves.” (Matthew 23:13-15) Perhaps Jesus is implying that the yeast of these leaders rises to hell,* not heaven.

For more on Jesus' parables see my blogs The Absurd Parable of the Unforgiving Slave, The God Who Gambles, Parable of the Vine and Branches, The Crooked Manager, The Friend at Midnight, Heaven Is Like a Crazy Farmer, He Speaks Of . . ., Salted With Fire, Talking Sheep and Goats, Is Your Eye Evil?, Two Prodigals and Their Strange Father, The Lazarus Parable Is Not About the Afterlife,and Jesus Used Parables Like a Sieve.

Posted by bertgary at 3:00 PM No comments: Links to this post