The Giant Flying Cube (No, not the Borg. The Bride.)

It’s strange, isn’t it, that John mixes his metaphors for the church side by side? The church, he says in the Book of Revelation, is both the Bride of Christ and a giant cube-shaped city called the New Jerusalem.

Revelation 21:2 And I saw the holy city, the new Jerusalem, coming down out of heaven from God, prepared as a bride adorned for her husband.

Why both a woman given in marriage and a city? It’s really quite simple.

John is contrasting fornication with a whore (Rome – the unholy city) and marital union with a virgin Bride (the church – the holy city).

Compare Revelation 21:2 (above) with selected verses from Revelation 17:1-9:

Revelation 17:1-9 "Come, I will show you the judgment of the great whore who is seated on many waters, 2 with whom the kings of the earth have committed fornication, and with the wine of whose fornication the inhabitants of the earth have become drunk." 3 So he carried me away in the spirit into a wilderness, and I saw a woman sitting on a scarlet beast that was full of blasphemous names, and it had seven heads and ten horns. . . . 7 But the angel said to me, "Why are you so amazed? I will tell you the mystery of the woman, and of the beast with seven heads and ten horns that carries her. . . . 9 . . . the seven heads are seven mountains on which the woman is seated . . .”

(This is referring symbolically to Rome’s seven surrounding hills for which it is famous.)

Fornication with the whore in the unholy city of Babylon (Rome and her idolatrous abominations), or union with the lamb-husband in the holy city called the New Jerusalem (the Lamb-husband’s kingdom and marital union with him)? Which will it be? John asks.

In John’s vision: Jesus is a Lamb, a groom, and a husband. The church is a bride, a wife, and a city. Rome is evil Old Testament Babylon, the unholy city, and the great whore.

So should we literalize John’s vision? Look to these mixed metaphors for your answer. Are Christ’s company of believers literally a bride? Obviously not. The bride is an image in a vision. Then is his New Jerusalem literally a massive cube flying down from the sky? Of course not. But see for yourself: 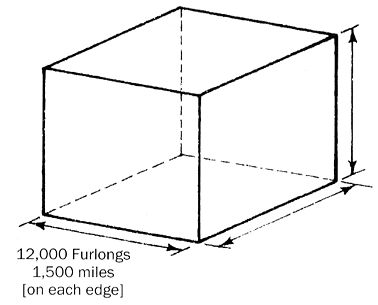 Revelation 21:16 The city lies foursquare, its length the same as its width; and he measured the city with his rod, fifteen hundred miles; its length and width and height are equal.*

*This New Jerusalem is in the form of a cube. Fifteen hundred miles cubed has a volume of eleven thousand million cubic kilometers, which is about half the volume of earth’s moon.

The New Jerusalem is a giant flying cube? If you take John’s image literally, yes! It’s a cube that’s about half the size of the moon with walls 1,500 miles tall (John’s highly symbolic 12,000 stadia or furlongs).

A cube that huge stuck to the side of our planet would destroy earth’s atmosphere, disrupt earth’s orbital spin, and catastrophically distort earth’s solar orbit and the moon’s earth orbit. In a nutshell, a cube that big landing on our planet would result in the extinction of all life, if not the tearing apart of the earth.

This is clearly not what John has in mind by marriage!

John is trying “by means of the reported measurements to give the impression of a city which in magnitude, symmetry, solidity, and splendour transcends the power of man to envisage.” He’s bursting “the bonds of language in an attempt to hint at what is essentially beyond imagination.” (Caird, The Revelation of Saint John, p. 272)

John is sharing the inexpressible Good News of God’s eternal, earth-heaven uniting presence in the Lamb-Groom and his New-Jerusalem-Bride. John is telling his churches that we are his Bride and we are his City, and that he is our husband and he is our home. What we will become is beyond words.

So let’s not take it literally. If the New Jerusalem is not a giant cube coming in for a landing, then what is it?

It’s clear to me that The End in John’s apocalypse is not a distant time or a massive place. The End-time Place John is describing is an eternal union with the person who is the Alpha and the Omega, the Great I AM. He is the Eternal Emmanuel, God with us, forever. All that is required of us is to open ourselves to trusting our “husband,” says John. Prepare to be his Bride and his City as he always meant for you to be. Be his bride and his home.

I call your attention to John 14:2 where Jesus says, “I go to prepare a place for you.” (italics mine) He goes (via death, resurrection, and ascension) to prepare a “room” (mone = abode) for you in his Father’s “house.” He goes to prepare a place, yet he is the place, he promises to bring you to himself (John 14:3) and he is in the Father:

John ..1:18.. No one has ever seen God. It is God the only Son, who is close to the Father’s heart (literally “in the bosom of the Father”) who has made him known. (italics mine)

The closeness of the relationship between God the Father and God the Son is expressed biblically by speaking of close proximity in space. They are in a place together, yet they are the place.

He’s speaking of something much more heavy duty than lodging. Jesus is talking about being “moved in” to the persons of the Father, the Son, and the Holy Spirit and their relationship of mutual love, admiration, and respect. He’s talking about utter union, not unlike a marriage.

In the archaeological excavations of Capernaum, Bethsaida, and other New Testament Jewish villages, we have learned that rooms were often added onto houses. It’s believed that when a son married, his father added a room on the house for the son and his bride. The new wife thus joined the household of her father-in-law.

Among Palestinians in the West Bank there is a similar practice. The Quran prohibits borrowing money even to build a home, and Palestinians, even if they aren’t particularly religious, might nevertheless avoid borrowing. So they only build the first floor when they have the money saved. But, they put very tall rebar in place to support another floor that they plan to build later when funds again are available. The purpose of such an addition is often a marriage.

Not long ago, a friend of mine who lives on the Mount of Olives in Jerusalem completed the third floor of his home on the occasion of his second son’s marriage. But rather than give the new third floor to his son and new daughter-in-law, my friend moved up to the third floor with his wife (with a great view of the Dead Sea and Jericho up there). The oldest son (already married with children) moved up from the first to the second floor. The newlyweds got the first floor.

Jesus calls his followers “brides.” The bride lives in a new room readied by the Son in the Father’s house. The relationship the believer has with Jesus is likened to a marriage relationship, arguably the most intimate human union possible. The two become one flesh. (Genesis 2:21; Matthew 19:5-6; Mark 10:8; 1 Corinthians 6:16; Ephesians 5:31)

This bride and groom analogy matches the verses in the Bible that refer to the church as Jesus’ Bride.

Ephesians 5:25 Husbands, love your wives, just as Christ loved the church and gave himself up for her,

Revelation 19:7 Let us rejoice and exult and give him the glory, for the marriage of the Lamb has come, and his bride has made herself ready;

Revelation 21:2 And I saw the holy city, the new Jerusalem, coming down out of heaven from God, prepared as a bride adorned for her husband.

These are John’s powerful portraits of Jesus’ followers, members of John’s congregations, those Christians who endure faithfully to their wedding day, their New Jerusalem day. And John’s key portrait of Jesus is that of a lamb, the one who is your lamb-groom and your lamb-husband. No need to remind you to avoid taking that literally!

John isn’t showing us future catastrophe. He’s showing us marital bliss in the newlywed’s abode—symbols of our eternal union and mutual indwelling with Christ.


For more on the Book of Revelation see my blogs 666, Rapture Interrupted, The Millennium, Pearly Gates and Streets of Gold, Names In the Book of Life, and The Lake of Fire Defined.

Posted by Unknown at 9:31 PM 2 comments: Links to this post