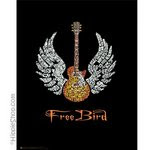 (Or a Lynyrd Synyrd Parable of the Kingdom of Heaven)


Perhaps I should just do as Jesus did and tell a parable. And since I'm from the South, perhaps a country fried parable is called for.


Entering the kingdom of heaven is like this: You are incarcerated for life in a dark and crowded maximum security prison when out of the blue a letter arrives containing your pardon and an invitation to a party. In the neighboring cells, all of your fellow jailbirds received the same.


Just then you hear a band from somewhere outside the prison launch into "Free Bird" by Lynyrd Skynyrd. And just then every prison door unlocks with a clang. The doors fly open. All of them.

You look around at the other prisoners. They're standing there rereading their pardons. They look at you and back at the papers. You read your pardon and your personalized party invitation again. Is this some kind of sick joke? Is it a test? Is it a trap?

You hold your breath and inch toward the open door. The others are watching you. You see your hand reaching for the opening like it's hot, like it's wired. But your hand goes through unharmed. Others inch toward their doors, suspicious eyes darting left and right, uncertain hands reaching out and quickly drawing back.

By now the chorus of "Freebird" is roaring in your ears, and something hopeful is growing in your heart. Without thinking, you bolt from your cell and run for your Life. Right behind you another prisoner runs for his. Then many run, tearing through the cellblock, all the doors wide open. Running and screaming like warriors charging into battle, you emerge from the prison into a green sunlit park. 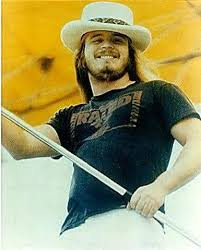 You and your cellmates rush the stage where you see none other than Ronnie Van Zant himself smiling as he looks right at you. Then he grabs the mic and directs the crowd, an enormous chorus, millions and millions of pardoned cons singing,

Guitars roar. Apple wine is flowing. Lamb is served. And Life is good.

Pardon the interruption, but a couple of Bible verses come to mind. Jesus quoted Isaiah saying,


I quoted it before, but Paul's words may make better sense here:


For God has imprisoned all in disobedience so that he may be merciful to all. (bold italics mine) (Romans 11:32)


Oh, yeah. I forgot about hell. Hell is easy to forget at a party! My parable continues:


It was loud as hell.Yet at the free-bird party in the park, Lynyrd Skynyrd was just warming up! The sound of "It's - not - fair!" coming from the unlocked prison was being drowned out by Ronnie and the boys, who were now singing,


While a Skynyrd concert might not sound like heaven to you, to a good old Southern boy, it's not bad at all. If you like, set the parable in a prison for women and let Janis Joplin sing "Bobby Magee."


"Freedom is just another word for nothing left to lose."


"The doors of Hell are locked on the inside." CS Lewis


If you like this parable, try my others: Pews Stink (A Black and White Satire), What Color Is a Green Apple?, The Kingdom of Heaven is Like Gravity, and A Guitar Hero Parable (Or the Gospel According to Slash).


For Jesus' parables see The Absurd Parable of the Unforgiving Slave, The God Who Gambles, Parable of the Vine and Branches, The Crooked Manager, The Friend at Midnight, Heaven Is Like a Crazy Farmer, He Speaks Of . . ., Salted With Fire, Talking Sheep and Goats, Is Your Eye Evil?, Two Prodigals and Their Strange Father, The Lazarus Parable Is Not About the Afterlife,and Jesus Used Parables Like a Sieve.
Posted by bertgary at 3:42 PM