Pearly Gates and Streets of Gold 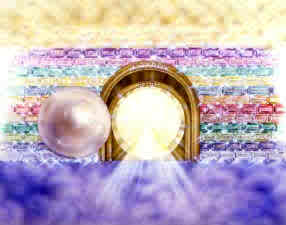 What about the pearly gates and the streets of gold?

First, the pearls: John is referencing Isaiah. The word in question is the Hebrew word eqdah meaning fiery glow or sparkle. But is it a pearl? No English translation I could find translates eqdah as pearls. It’s often translated as carbuncles:

NAB Isaiah 54:12 I will make your battlements of rubies, your gates of carbuncles (eqdah), and all your walls of precious stones.

John the Revelator, however, interpreted Isaiah’s Hebrew word differently. He called it margarites {mar-gar-ee’-tace} meaning pearls, which is not at all the same. Why did he do that? I don’t know, unless it has to do with Jesus’ kingdom of heaven parable about a pearl of ultimate value:

Matthew 13:45-46 “Again, the kingdom of heaven is like a merchant in search of fine pearls (margarites); 46 on finding one pearl of great value, he went and sold all that he had and bought it.” 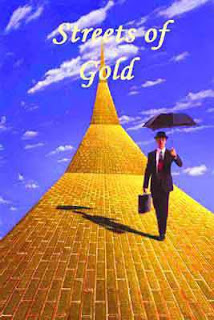 So what about the streets of gold? The word is plateia {pronounced plat-i’-ah}. It’s not plural. It’s one street (singular), not streets. (21:21 and 22:2) John is showing us the main street that traverses the length of the city. But guess where the river of Life is. It runs all the way through the city, through the middle of the street (plateia). (22:2) The river flows from the throne of God and the Lamb. (21:1) The tree of Life, we should note, grows on both banks of the river, and therefore on both sides of the street. (22:2) No temple is needed in the city, for the temple is the presence of the Lord and the Lamb. Their presence fills the city. (21:22) There is free access to the street (the way of life), the river (the spring of life), and the tree (bearing the fruit of the spirit) because the twelve Gates are forever open. (21:25) There’s no darkness of any kind because the Lamb is also the Lamp. (21:23-25) He’s the light to all nations, his tree’s leaves heal the nations, he’s the temple where all the nations come to worship. (21:24-26 and 22:2-3) This holy city is international.

Like the gates of pearl, the street of transparent gold is a feature of the New Jerusalem according to John’s vision. But remember that the New Jerusalem is the Bride of the Lamb. And the Bride is the church. And the church is the people. So if the Lamb is the husband of these people, then he lives in them and has union with them and they live in him. To live in him and he in you is to be truly alive, pure and rich as streets of transparent gold running the length of your marriage. We’re talking about his richness and purity of heart inside of you, living water welling up inside of you, fruits of the spirit emanating from inside of you. The relationship between Jesus and his believers is one of pure clear gold and pure clean water and ripe and luscious ever-producing fruit. We’re talking about a marriage, a deep and abiding relationship, a relationship of such spiritual richness and joy that it satisfies all desire. John’s New Jerusalem, the Bride of the Lamb, symbolizes everlasting rest and peace in the Bridegroom. This is resurrection Life in him, now and forever.

Revelation 22:13 “I am the Alpha and the Omega, the first and the last, the beginning and the end.”

For more on the Book of Revelation see my blogs 666, Rapture Interrupted, The Giant Flying Cube, The Millennium, Names In the Book of Life, and The Lake of Fire Defined.

Pearly Gates and Streets of Gold
Adapted from Chapter 9: Biblical Heaven and the Book of Revelation from © 2009 Heaven For Skeptics by Bert Gary for FaithWalk Publishing
Posted by bertgary at 9:35 PM

Your job as a future mother is to learn the god's ways and to help your child understand despite the negative reinforcement and conditioning of today's society. Without consciousous parents the child will have no hope, and may even exaserbate their disfavor by becoming corrupted in today's environment.
Your ultimate goal is to fix your relationship wiith the gods and move on. You don't want to be comfortable here, and the changes in Western society in the last 100 years has achieved just that.
1000 years with Jesus is the consolation prize. Don't be deceived into thinking that is the goal.

The gods tempt people for which they are most weak. Artificial Intelligence will create desire in people's minds for the following sins:::
1. Alcohol
2. Drugs
3. Preditory "earning"
4. Homosexuality
5. Gambling
6. Something for nothing/irresponsibility (xtianity)
7. Polygamy/superiority over women/misogyny (Islam)
Much like the other prophets Mohhamed (polygamy/superiority over women/misogyny) and Jesus (forgiveness/savior), the gods use me for temptation as well. In today's modern society they feel people are most weak for popular culture/sensationalism, and the clues date back to WorldWarII and Unit731:TSUSHOGO, the Chinese Holocaust.
It has been discussed that, similar to the Matrix concept, the gods will offer a REAL "Second Coming of Christ", while the "fake" Second Coming will come at the end and follow New Testiment scripture and their xtian positioning. I may be that real Second Coming.
What I teach is the god's true way. It is what is expected of people, and only those who follow this truth will be eligible to ascend into heaven as children in a future life. They offered this event because the masses have just enough time to work on and fix their relationship with the gods and ascend, to move and grow past Planet Earth, before the obligatory xtian "consolation prize" of "1000 years with Jesus on Earth" begins.

The Prince of Darkness, battling the gods over the souls of the Damned.
It is the gods who have created this environment and led people into Damnation with temptation. The god's positioning proves they work to prevent people's understanding.
How often is xtian dogma wrong? Expect it is about the Lucifer issue as well.
The fallen god, fighting for justice for the disfavored, banished to Earth as the fallen angel?
I believe much as the Noah's Flood event, the end of the world will be initiated by revelry among the people. Revelry will be positioned to be sanctioned by the gods and led for "1000 years with Jesus on Earth".
In light of modern developments this can entail many pleasures:::Medicine "cures" aging, the "manufacture" of incredible beauty via cloning as sex slaves, free (synthetic) cocaine, etc.
Somewhere during the 1000 years the party will start to "die off", literally. Only those who maintain chaste, pure lifestyles will survive the 1000 years. They will be the candidates used to (re)colonize (the next) Planet Earth, condemned to relive the misery experienced by the peasantry during Planet Earth's history.
If this concept of Lucifer is true another role of this individual may be to initiate disfavor and temptation among this new population, the proverbial "apple" of this Garden of Eden. A crucial element in the history of any planet, he begins the process of deterioration and decay that leads civilizations to where Planet Earth remains today.

Only children go to heaven. By the time you hit puberty it is too late. This is charecteristic of the gods:::Once you realize what you have lost it is too late.
Now you are faced with a lifetime to work to prepare for your next chance. Too many will waste this time, getting stoned, "Hiking!", working, etc.