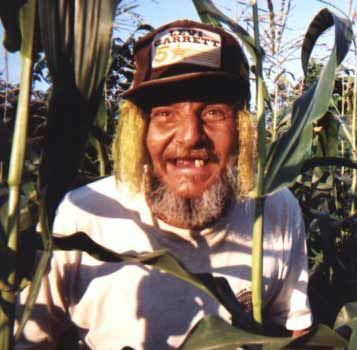 
The always overlooked point of this parable is that the farmer is reckless with his seed. A sane farmer would carefully plant expensive, good seed one by one in the rich, cultivated soil of a field cleared of rocks, weeds, and brambles.

Yet, in Matthew 13, seed is landing all over the place, even on the road and on rocks and in thorn bushes. Jesus’ parable-farmer is flinging expensive, good seed in every direction. He must be crazy! Why would he throw perfectly good seed on the road? On rocks? In a brier patch? That’s not just wasteful. That’s nuts!

Thankfully, a few seeds land (purely by chance, it seems) in some good soil, and those seeds grow a bumper crop. So what’s Jesus’ message here?

What if God the Father (the insane farmer!) scatters the truth of his kingdom madly and passionately on everyone? What if he’s seeding the whole world with the good news of his gracious kingdom, seeding the entire cosmos with his Son’s all-inclusive message of Life, and wildly seeding the universe with his word of grace to all people? Jesus said,

“[For your heavenly Father] makes his sun rise on the evil and on the good, and sends rain on the righteous and on the unrighteous.” (Matthew 5:45)

I think Jesus’ point is that the Father loves perfectly—that is, indiscriminately. Impartially. He confers grace to the whole world via the kingdom present in Jesus. His word of truth and freedom and Life is freely distributed to everyone. He doesn’t play favorites.

For Jesus to go to Galilean agricultural villages like Chorazin and Cana to preach, and for him to say that his heavenly kingdom is like a farmer who went out with good seed to plant, and for that farmer to be said to waste seed in every direction hitting the road and rocks and brier patches, would have been both highly entertaining and maybe a not a little bit shocking to those folks. Why? Because a sane farmer from Chorazin or Cana would never do that!


The parable implies that he’s an extravagant Father to be sowing such precious seed so recklessly. But reckless extravagance is required to seed a whole planet, or should I say a whole kingdom.

Maybe Jesus is telling his listeners that everybody is graced equivalently by a God who is no respecter of persons. (Acts 10:34) He has no bias. Maybe God graces everyone just the same, whether you are a rock, a brier, a path, or fertile soil.

This is absolutely congruent with Jesus’ parable of a father who loves his runaway prodigal the same as he loves his stay-at-home prodigal (Luke 15:1-3 and 11-32).

It seems that everyone gets this seed-gift in equal measure in the kingdom of heaven. Forgiveness is scattered on the whole earth without calculation of who’s more deserving. It doesn’t seem fair to scorekeepers, and it may seem as crazy as a farmer wasting perfectly good seed by flinging it without direction, but it is grace personified from the perspective of the heaven of Jesus’ parables.

If this universal grace thing makes you feel uncomfortable, no wonder! Jesus’ word is the grace-irritant in the oyster of your scorekeeping, judgmental heart.

For more on Jesus' parables see my blogs The Absurd Parable of the Unforgiving Slave, The God Who Gambles, Parable of the Vine and Branches, The Crooked Manager, The Friend at Midnight, Heaven Is Like a Crazy Farmer, He Speaks Of . . ., Salted With Fire, Talking Sheep and Goats, Is Your Eye Evil?, Two Prodigals and Their Strange Father, The Lazarus Parable Is Not About the Afterlife,and Jesus Used Parables Like a Sieve.