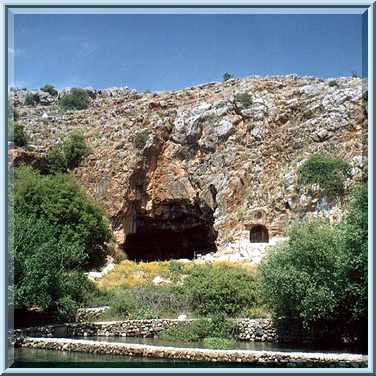 Jesus and Pan at Caesarea Philippi


Greek mythology, Palestinian geography, and the biblical narrative come together in a most unusual way at ancient Banias, better known as Caesarea Philippi.


In the first century, Pan was known as the only god to have died "in our own time." Specifically, the god is recorded as having died during the reign of Tiberias, the Emperor of Rome at the time of Jesus' death. "Pan the great is dead," shouted a sailor, Tammuz, sailing off the coast of Italy. There were reports of great lamentation. When Tiberias heard of it, he believed it a mistake. It could not be that the great son of Hermes and Penelope was dead, he concluded, but a lesser demon by the same name.


Banias or Banyas---Arabic spellings of Paneas---is the ancient city at the foot of Mt. Hermon dedicated to the god, Pan. (Herod Philip, a son of Herod the Great, renamed the city Caesarea Philippi after himself.) The ruins of a temple dedicated to Pan are nearly obliterated now, yet the cave in which the god's great statue stood is still there, and votive niches in the cliff wall also remain. 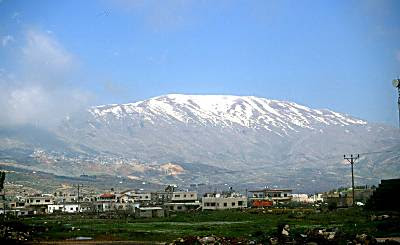 In the same way that Banias is named for Pan, Mt. Hermon is named for Pan's father, Hermes. The mountain straddles the modern Israeli-Syrian border. It rises to a height of over 9000 feet, and in the rainy months of December to March, is often snow-capped. (There is even a ski slope there now!) Only on a clear day---unusual during the winter---can you see it from the city of Tiberias on the Sea of Galilee (the Kineret). More often the view of it is obliterated even at close range in cold months by haze or mist or dense fog.


The god Hermes was the son of Zeus and Maia. Being best known probably as "the messenger of the gods," perhaps it is not surprising that Hermes' name (Mercury in Roman mythology) came to the English language in the word hermeneutic, which has to do of course with linguistic studies and interpretation and translation, most often associated with biblical exegesis.
However, Hermes was also the conductor of the souls of the dead to Hades, the place in Greek mythology where dead peoples' souls go to wander around in boredom.


Pan---the Greek word for "all"--- was among other things the guardian of thresholds. His job was to frighten you when you reached a threshold in life. That is where we get the word pan-ic! It was his job to panic anyone approaching a threshold, especially that of a cave.


Putting this together, in the Cave of Pan at Caesarea Philippi stands a statue of Pan, guarding the threshold to the cave. This cave is in Mt. Hermon, named for Hermes, the conductor of souls to Hades. The Cave of Pan logically came to be known as the "gateway to Hades." So, if you were to die and you did not get panicked by Pan, your soul would cross the threshold of the cave, and Hermes would take you to Hades from there! That was the mythology of this beautiful, natural setting. Interestingly, Pan was also the god of the pastoral and natural, thus our theological terms pantheism and panentheism. We in the English speaking world also have Pan to thank for pandemonium and pandering. 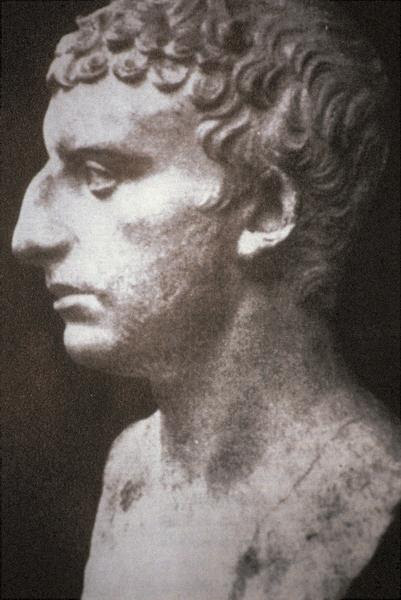 Josephus, the first century historian, wrote of Banias and the Cave of Pan. He recorded that the depth of the waters in the cave were beyond measure. The waters he wrote of are today called the Banias Spring. They are one of three major sources of the Jordan River. The water no longer comes from within the cave. An earthquake may have caused a cave-in. Instead, the water flows from beneath the rocks and ruins in front of the cave. It flows into the Jordan, then the Sea of Galilee, then the Jordan again, and finally the Dead Sea.


Jesus' time at Caesarea Philippi was in a way a Gethsemane in the north. He had left Herod Antipas' territory. Four reasons for heading north are mentioned in the Gospels. Jesus had just heard of the death of John the Baptist (Matthew 14:9-13); Herod was looking for him (Luke 9:9); the disciples were tired from their missionary journeys (Mark 6:30-31); and the crowds had tried to take him and make him king by force (John 6:15). Any one of these would be reason enough to bug out, but taken together, it is easy to see why Jesus needed time away.


Luke makes it clear that at Banias Jesus was alone in prayer, and the disciples were with him (9:18). It is in the context of problems and pain back in the Galilee, in seclusion and in prayer at this northern pagan city, that Jesus becomes circumspect about things to come. The nature of his ministry/messiahship are in focus again, as they were in the temptations in the Judean wilderness. In the story of Peter's confession and in the temptations of Jesus, Satan makes an appearance, and both are times of struggle and loneliness.


After Jesus told them he would go back to Jerusalem to die, and after he and Peter had "the screaming match at Caesarea Philippi" (Mark 8:31-33), Jesus stayed six days longer there (Mark 9:2). Six days longer. We have no way of knowing what went on that week. But in light of Jesus' revelation of suffering and death, there was probably not a lot of rest and relaxation.


After six days (Luke says eight), he took his "inner circle" with him up to a high mountain apart (Mark 9:2) by themselves (Matthew 17:1) to pray (Luke 9:28). Obviously the only high mountain in the vicinity is Har Hermon. (Mt. Tabor then is certainly a traditional site for pilgrims.) There he takes on an unearthly appearance, and he is visited by Moses and Elijah. The prophet of Mt. Sinai and the prophet of Mt. Carmel meet Jesus on Mt. Hermon. The servant of Yahweh who stood down Pharaoh, and the servant of God who stood down 450 prophets of Baal, spoke with Jesus concerning his upcoming confrontation with the Judean authorities on Zion, on Moriah, and on Calvary (Luke 9:31).

Moses and Elijah turned to leave, so Peter and company proposed booth construction, and immediately one of those thick mists rolled in. The voice proclaimed essentially what it had proclaimed at Jesus baptism (Matthew 3:17 and 17:5). It is interesting how the baptism and temptations are joined, and how the scene at Banias and Hermon are joined. At the southernmost point of the Jordan River, affirmation of God's voice led to struggle in the Judean wilderness (Mark 1:11-12). Conversely, at the Banias Spring (the northern headwaters of the Jordan River), struggle led to the affirmation of God's voice on Hermon. We have come full circle in the fullness of time, for the baptism and temptations mark the beginning of Jesus' Galilean ministry (at the end of the river), while the prediction and transfiguration mark the end (at the beginning of the river). After the events in the north, Luke says, he set his face toward Jerusalem (9:51). Mark says he began striding ahead of them, and the disciples were amazed and afraid (10:32).